We let our dog out one morning, calling her inside when she started barking incessantly. When she wouldn't come, Chuck said she must be barking at something and went to investigate. He called me over to the side of the house, where Maggie had found a litter of four kittens that lay huddled on the ground. With their mother nowhere in sight, Chuck asked what we should do, and I suggested taking them inside.We realized they were feral kittens when he picked them up and the malnourished little rascals hissed and scratched as he put them in a dog carrier. Luckily, they were old enough for kitty kibble. We confined them to the bathroom as we considered what to do next.

I thought we should leave them with a rescue group until they could be adopted. My local humane society was unable to help unless they were spayed/neutered. They offered free surgeries when the kittens were at least eight weeks old. We thought they were about four weeks old, but learned they were probably a little older. Nevertheless, the earliest tentative appointment for surgery was over a month away.  I figured we would nurture them until they were old enough for surgery. As the days went by, their skinny little forms gained weight, and they became playful and started meowing instead of hissing, and didn't complain too much when petted or picked up.

After only a couple of weeks, we figured it was time to find them a new home because they seemed too confined in the bathroom and occasionally escaped.  Also, Maggie and Georgia, our Holland lop bunny, had become nervous and jittery, which made it difficult for us. I researched our local animal control and gave them a call when I learned that they have a no-kill contract with a veterinarian clinic. They picked up the kittens that same day.

It took me awhile to get used to the kittens' absence, and I felt guilty about letting them go. What if animal control had sent them to the vet to be euthanized? I called the vet anonymously and asked where kittens they put up for adoption could be seen. They said their kittens go to one of various rescue groups, who put them up for adoption. I felt much better after that. 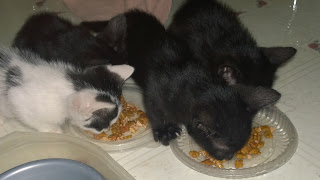 Posted by Esther at 4:32 PM No comments:

St. Jude, Pray for Us


In the Catholic Church, the sacrament of Confirmation gives us a special grace that strengthens and deepens our faith so that we can share it with others by example in what we say, the things we do, and how we live our lives.  In preparing to receive this sacrament, Catholics are asked to choose a saint who will serve as their role model and on whom they can call on to intercede and pray for them. One of my sons chose St. Jude for his Confirmation saint, and recently, during some serious situations, I found myself calling upon him, too.

St. Jude Thaddeus is a relative of Jesus and one of the twelve apostles, not to be confused with Judas Iscariot, the apostle who betrayed Jesus. He is the patron saint of lost causes and desperate cases, reminding us that nothing is impossible with God. The Epistle of Jude is attributed to him, and in it he warns Christians against false teachers and prophets and stresses perseverance and growth in faith, prayer, and love of God.

In addition to private prayer, I have visited the St. Jude website, www.shrineofstjude.org and sent prayer requests that were delivered to the altar of St. Jude at the National Shrine of St. Jude in Chicago. Around 2:35 pm on June 6th, I went to the website and placed a prayer request with vigil light for the healing of my daughter-in-law before heading out to the hospital. My son had called earlier to inform us that his wife had suffered severe injuries in a motorcycle accident.  My family and I were six hours away from the hospital in Lubbock, TX. When we arrived shortly after 9 pm, we learned that she had passed away shortly before 7 pm, around the time my son arrived from Abilene.

Not all prayers are answered the way we would like. Leanne’s death was a shock to us all, for she was young and full of life with the promise of great things to come in the future. As the days go by and life moves on, her absence is a bitter pill to swallow.  The greatest consolation is that God knows what He’s doing, and He asks us to trust in Him.  I also find comfort in the numerous ways that the Catholic Church offers for souls to gain entry into Heaven, including: the Holy Sacrifice of the Mass, the rosary, the Stations of the Cross, a plenary indulgence for Divine Mercy Sunday, the Divine Mercy chaplet, the Divine Mercy novena, and plenary indulgences on All Souls Day.


I finished reading The Autobiography of The Little Flower, Story of a Soul and learned about the extraordinary life of St. Therese of Lisieux. Who among us can say that their parents sought entry into religious life but were turned down before getting married? Or that their parents desired a religious vocation for each of their children, grooming them toward this end by immersing them in their faith through daily life? Amazingly, all five surviving daughters became nuns!

What a different world this would be if we responded as St. Therese: “Whenever I find myself faced with the prospect of an attack by my enemy, I am most courageous; I turn my back on him, without so much as looking at him, and run to Jesus. I tell Him I am ready to shed all my blood to prove my faith in Heaven. I tell Him I am quite happy that the eyes of my soul should be blind, while I am on earth, to the heavenly wonders in store for me, so long as He will open the eyes of unbelieving souls for all eternity. So, in spite of the fact that this trial takes away all sense of joy, I can still say: ‘Thou hast given me, O Lord, a delight in Thy doings’ (PS. 91:5), for what can give such keen delight as suffering for love of You! The more personal the suffering and the more hidden from the eyes of the world, the more pleasing it is to You, my God.” (pp. 121-2)

Free Catholic eBook and audiobook online:
Story of a Soul
Posted by Esther at 11:47 AM No comments:


As the fifth anniversary of the publication of Ebram’s Story: The Haunting approaches, I’ve taken time to reflect on my writing journey. In many ways, the book memorializes the childhood of my four kids. Like the character, Eric, my oldest son was fascinated with cars. Another son Chris went through a period in high school where he dressed in black: jacket, shirt, jeans, socks, shoes, cap; hence, the idea for the type of clothing Shroudas wore. After five years in Nebraska, we moved to Texas; the Casas-Treski family moved from Iowa to a “haunted” house in San Antonio. The basis for the haunted house was, indeed, one of my brother’s experience living in one.


As a writer for Christians, my book includes a couple of important things often left out in secular children’s books: a stable two-parent family and characters that make good choices for the glory of God. Many authors and publishers today will argue that children are drawn to books with main characters without parents, dead or alive.  Examples of this type of book are numerous, including several Disney classics. Here’s a link to an article with this viewpoint:
http://blog.nathanbransford.com/2010/09/in-defense-of-deadabsent-parents-in.html,


The author of the aforementioned article states, “Early and medieval stories across cultures, from Cinderella (orphan) to Aladdin (fatherless), feature characters who lack one or more parental units.” The problem is that children must be taught what a healthy home life looks like because too many don’t have one and end up in broken homes as adults, oftentimes like their parents.